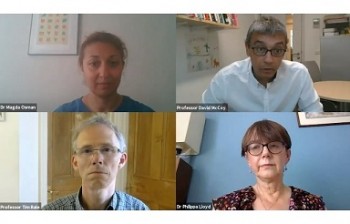 Queen Mary experts discuss the impact of Covid-19 in the second Digital Public Lecture Series event. Credit: Queen Mary
In the latest Digital Public Lecture Series three experts from Queen Mary continued their discussion on the impact of Covid-19 and highlighted how we assess its severity and if this opportunity to reset society will be seized or will pass us by.

The second episode of the newly launched series carried on from the first digital panel event titled ‘Covid-19 and its Global Impact’ in which Dr Philippa Lloyd hosted the session with Turing Fellow Dr Magda Osman, Professor Tim Bale and Professor David McCoy. The series is available to watch online at the link below.

Judging the severity of Covid-19
During the discussion David McCoy, Professor of Global Public Health at Queen Mary’s Blizard Institute, raised the issue that prior to Covid-19 about 1400 people would die everyday and while the excess mortality rate caused by Covid-19 is significant at roughly 1.5 to 3 times higher than usual it’s perhaps not as significant in relation to the baseline mortality rate.

He said: “Many of those are potentially deaths that have been brought forward possibly by several months so when you start to look at the metrics of the severity of this covid using those kind of indicators for example it begins to appear to be less severe. I’m not saying that it’s not severe but its less severe and it’s really important to have that perspective.”

Interpreting the media response
How we judge the severity of the virus was also highlighted by Dr Magda Osman, Reader in Experimental Psychology and IADS member at Queen Mary’s School of Biological and Chemical Sciences.

She explained that if we follow the media response we might notice one media outlet comparing the number of deaths to 9/11 or the Vietnam War while another might compare the number against those that die because of seasonal flu and that this point of difference has become politicised.

She said: “If you are a member of the public reading or watching news of those two very different kinds then there is an inherent assumption about whether you're misinterpreting the details that are out there because the comparison is one which is politicised.”

Will we reset?
Later in the conversation Tim Bale, Professor of Politics at Queen Mary’s School of Politics and International Relations, picked up on the idea that some of the changes that we’ve made in this period may have a spillover effect into how we live our lives going forward.

He said: “Small incremental things believe it or not could actually help us when the argument is made that we need to make some serious changes in our lives but I am one of life’s sceptics, although I like to think we will have this big reset moment... I’m already beginning to see when I look at opinion poll evidence in this country, and it might be true in other places as well, people beginning to go back to the grooves they're already in. But let's hope that I'm wrong in that sense.”
Link: http://youtu.be/cfobWt7jrp0