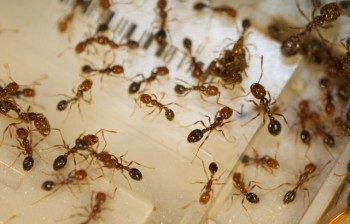 Workers of the red fire ant on a sequencing chip. Credit: Yannick Wurm and Emeline Favreau.

Dr Yannick Wurm and his research team from Department of Organismal Biology, School of Biological and Chemical Sciences, Queen Mary University of London, have found that harmful mutations accumulating in the fire ant social chromosome are causing its breakdown.

The chromosome, first discovered by researchers at the University in 2013, controls whether the fire ant colony has either one queen or multiple queens. Having these two different forms of social organisation means the species can adapt easily to different environments and has resulted in them becoming a highly invasive pest all over the world, living up to their Latin name Solenopsis invicta, meaning "the invincible".

For the new study, published in eLife, the research team (led by Dr Yannick Wurm, Reader in Bioinformatics and Turing Fellow) performed detailed analyses of the activity levels of all the genes within the social chromosome for the first time to understand how it works and its evolution. They found that damaging mutations are accumulating in one version of the social chromosomes, causing it to degenerate.

The findings also showed that most of the recent evolution of these chromosomes stems from attempts to compensate for these harmful mutations.

The Wurm lab studies the lives of social insects including ants and bees, and how they are affected by social and environmental challenges. For this, lab members combine behavioural experiments with cutting-edge molecular approaches including genomics and bioinformatics. More information at http://wurmlab.com/.